I was asked, and am deeply honored, to attend West Point and introduce Dr. Buzz Aldrin and Lt. Russel L. General Honore to young West Point Cadets – and a few older West Point grads too.

Buzz is a West Point graduate, and today, at age 86, is full of energy and sharp as a tack which gives me hope that I could be the same when I reach his age.

Lt. General Russel L. Honore is an imposing presence, as would be a general that led our troops overseas and saved many Americans by leading the Katrina rescue missions in New Orleans.

I had the honor to stand next to Buzz Aldrin and Lt. General Russell Honore on stage at The West Point Military Academy. After listening to them, I thought of our company motto of Saving America, One Family at a Time. Some tell me our motto corny but I still love it anyway.

Dr. Aldrin is 86 years young, and he is excited about reaching for the stars. He spoke about his dream of an American walking on Mars, and added a few stories about walking on the moon.

Lt. General Honore briefly spoke about his time leading troops in Iraq and Afghanistan, but mostly spoke about his time leading the Katrina recovery initiative. General Honore’s major theme was “Don’t be Stupid!” He showed photos homes built between a river and a levee that, of course, when a flood occurred that home was under water. He stated that overbuilding on the beaches, where the highways can not support a mass exodus is stupid. His theme was “We need to Stop Being Stupid.”

When thinking about those two themes, coupled with being inspired by walking the West Point grounds, seeing the young, proud, competent, striving, and courteous cadets training, viewing the inscriptions of Duty, Honor, Respect and Overcome amongst the powerful granite walls that make up this exemplary institution I could only think about how this relates to my business and my industry.

I am in the financial services industry and when it comes to duty, honor and respect my industry dismally fails, although my industry has overcome with the help of the U.S. taxpayer and gifts from Washington D.C. As ashamed as I am about my industry, I am equally proud of our company.

Buzz encourages us to reach for the

stars. Our motto is Saving America One Family at a Time. That is a rather audacious goal but we at Sipos Financial help families plan their lives so they are financially independent and will live their lives with dignity and respect. I have personally seen too many people live in shame by needing to ask their children for financial help in retirement, or lose their dignity by standing in a government line for a block of cheese while signing a statement that they will not sell that cheese but eat it for their own consumption.

General Honore implored us to stop being stupid. We ask our client’s questions such as:

Is doing the same thing today as you did in 2008 yet hoping for a better result – isn’t that what General Honore would so bluntly say “Is Stupid?”

We show our clients how to have strong downside protection and how buy and hold (hope) worked well in the 1980’s and 1990’s but does not work well at all in the 2020’s. This is how smart money is managed and we are bringing those smart techniques to the middle class.

Many families are storing away cash in retirement plans that give them a tax-deduction today, but will be taxed at tomorrow’s much higher rates. David Walker, the CFO of the USA (comptroller general) states that tax rates will increase dramatically as the Baby Boomer retire and receive their Social Security, Medicare and Medicaid benefits. Those three government benefits coupled with the interest on our Federal debt will demand, according to David Walker, that tax rates increase significantly. The Baby Boomers dramatically underfunded pensions will also be funded by additional tax rate hikes.

Many clients initially believe they will be at a lower tax rate upon retirement, but are surprised to find that many deductions are lost when they reach retirement. Children deduction vanish when they leave your nest, as does the mortgage interest deduction in your later years. Business deductions dissolve after you sell your business. These deductions may add into the ten’s or 100’s of thousands of dollars each year. If you lose your deductions as you age coupled with increasing tax rates, which David Walker states is inevitable simply due to the math, families are not IN CONTROL of their retirement. Your bank statement may read $1,000,000 but you may have only access to $500,000 or less depending upon Congress’ tax whims.

I ask my clients the following analogy: If you went to a banker for a $100K loan and he wrote and handed you the check and you then ask; “What is the interest rate and when does the banker want the money back?” The banker replies “Pay back the money starting when you are 65 and I will tell you the interest rate when you reach 65 years old.” I then ask the client; “Would you cash that check?” So far, everyone said NO!

But, isn’t that a 401K plan or an IRA? You are saving money in an account and your account value may be a big number, but Uncle Sam can raise tax rates to any rate he wants any time he wants and you could have one-half or one-third the bank statement amount depending upon tax rates during retirement. Note: During the Second World War the top tax rate was 94%. In 1981, the top tax rate was 69%. It’s hard to believe but tax rates are now at historic record lows.

Now you can too reach for the stars and keep control of your money. You can live in the confidence that your retirement years will be lived with dignity. As General Honore would say “That is smart!”

Thank you for your invitation to speak at West Point, and the privilege to stand on the same stage as Dr. Buzz Aldrin and Lt. General Honore. With Buzz Aldrin’s inspiration coupled with General Honore’s wisdom, we look forward to Saving America One Family at a Time! 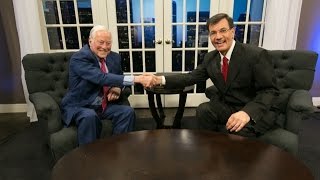